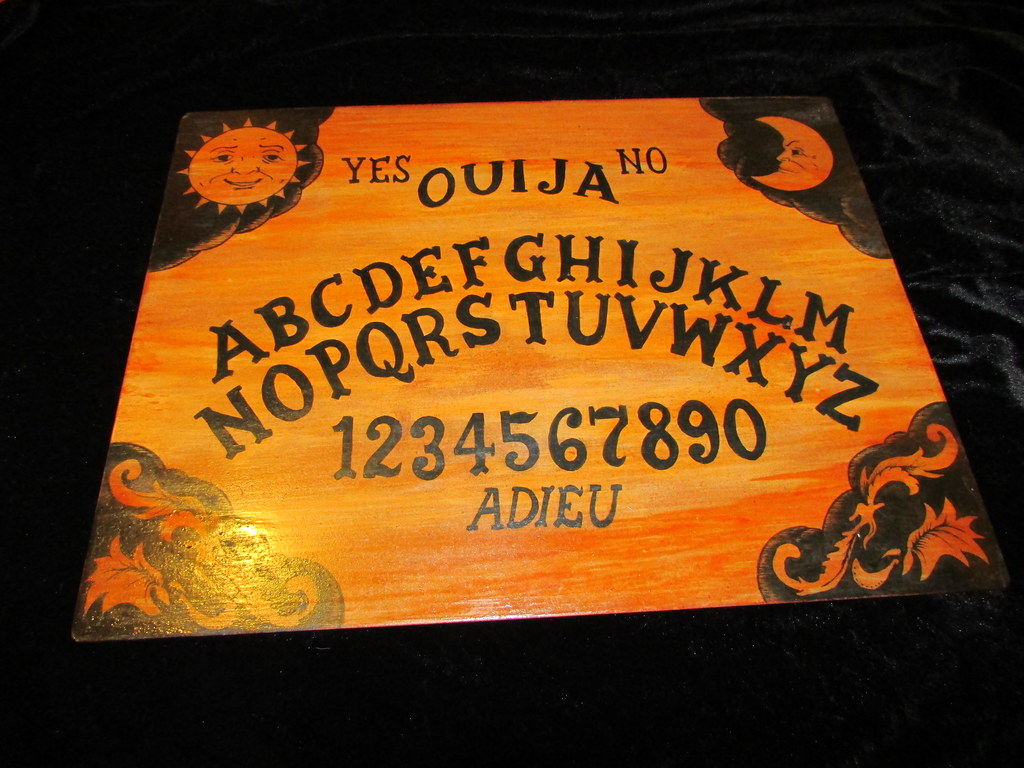 Young Estefania snuck a Ouija board in to school, to use with her friends one day, little did she know it would forever change her life.

A Little bit of Ouija Board History

The Ouija board or spirit boards have been around for centuries. The modern day Ouija board came to be in February of 1891. It was first sold in Pittsburgh, Pennsylvania at a toy and novelty shop. Use of the Ouija board grew thanks to America’s obsession with spiritualism in the 19th century. Spiritualism was a big thing in Europe already but it hit the United States hard in 1948; with the Fox sisters. One of the investors of the Ouija was Elijah Bond and he had a sister in law named Helen Peters. While playing the board, Helen asked what its name was and it spelled Ouija. When she asked what it mean the board says ‘Good Luck’. However, there are reports they Helen had a pendant that read Ouida after a famous feminist author and they think Helen just changed Ouida to Ouija. It was marketed as a family game and later became known as a way to contact the deceased (after WWI).

The Vallecas case is named after the neighborhood in Spain, where it all took place. There is also a movie on Netflix called Veronica, based on this story. This is the first case where paranormal phenomena was reported in a police report.

This took place between 1990 and 1991, in the Vallecas neighborhood of Madrid, Spain.

Estefania Gutierrez Lazario was 18 and the eldest of 4 siblings. In March 1990 she went to school, as usual, but her friend had snuck in a Ouija board. They had just started dabbling in the occult and the boyfriend of one of the friends had just died. They were attempting to contact him with the board, in the girls bathroom. Her sister was part of the group too, but she was guarding the door.

A teacher busted them, took the board and broke it in half. At that moment, all the girls & the teacher said they saw gray smoke, which Estefania ended up inhaling. After that day, nothing was the same for Estefania. Her parents stated that she began having fits of rage and began seeing shadow people at night. Estefania said the shadow people had no face, hooded cloaks and they wanted her to go with them. She also began suffering from insomnia, hallucinations and seizures. They went to many different doctors and hospitals, but no one could figure out what was going on with her.  Her mental state began worsening and she even attacked her sister so badly she knocked her out, and her mouth was foaming during the attack. After that attack her health continued to decline. After one seizure, she was taken to the hospital, where she fell into a coma and died. There was no official cause of death and the autopsy reported “sudden and suspicious death”.

After her death, things worsened in the home. Even before her death, weird things were happening in the apartment, like objects moving on their own, doors opening and closing by themselves and Estefania’s siblings said at times it felt like they were being grabbed by an invisible force. Guests of the family also stated to have experienced things there. Her mother stated she could hear Estefania’s screams. The family heard banging, things kept moving, they heard the disembodied laughter of men and heard glass breaking. 2 years after Estefania’s death, a picture of hers burst into flames, but the frame and the glass were fine, it was just the picture that was burned.

On November 27th, 1992, they decided to get the police involved and inspector Jose Negri and the team were sent. The night before, Concepcion (Mrs. Gutierrez) felt pressure on top of her and told her husband “someone is here” and right after that, something grabbed her feet and her hand. When the police arrived, they found the entire family outside, even though it was raining and cold. The team says they all felt a weird presence, as well as nauseated. Here are parts of the police report, which is the first report to ever be filed as paranormal/unexplained.

“On this day, and for the past few hours” strange phenomena have been noticed. Some of these include some invisible force turning crucifixes upside down, cabinets moving and voices.”

The police entered the apartment with the lights off and all heard banging, but they knew no one was inside. Each time they thought they found the source of the banging, it seemed to move from one place to another. One officer was almost hit by a heavy cupboard door but ducked in time, nothing was there to open the door. 4 officers were too freaked out by this and waited outside. When the officers entered Estefania’s old room, they found a cross that had been previously bolted to the wall had been ripped off and so had the Jesus figurine attached to the cross, but no one had been in the room. They also found three claw marks where the cross had been. When the officers entered the bathroom, they all felt a sudden drop in temperature, unlike anything they had ever felt before.

Once the family moved away, all paranormal activity stopped.

Estefania's mother maintains these events as true, but her siblings, now claim they were exaggerated.

"Homemade Ouija board" by Marcos Telias is licensed under CC BY-NC-ND 2.0