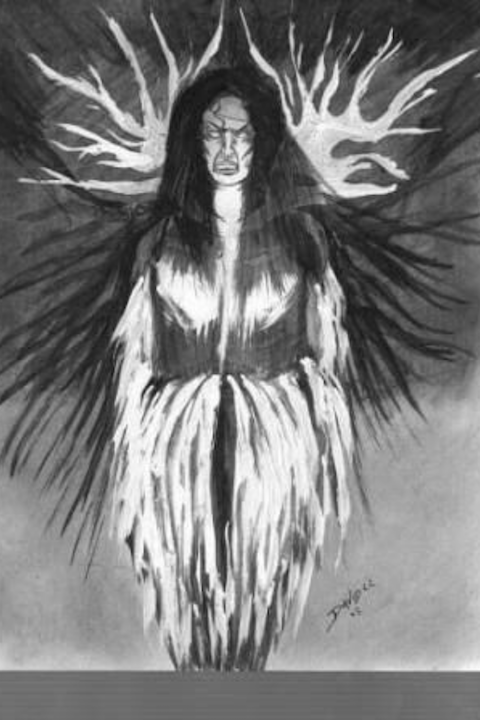 Read our notes and see our sources for our podcast episode on the Mayan legend of Xtabay, listen here

X’tabay (esh-ta-bye) is a dark haired woman dressed in white. She floats above a ceiba tree at the edge of a body of water. She sits on the trunk of the tree brushing her hair and waits for drunk men or lost men at night. She seduces these men and puts them in a trance where she tortures them but because they are in a trance they endure the torture. The encounter usually ends in death. Sometimes throwing them down wells, into the underworld and other times she turns into a snake and devours the man. In other versions of the legend, she appears to a man as anything that will lure them. She then rips his heart out and then pushes him over a cliff.

In Quintana Roo, she is believed to be a punisher of drunks, thieves and violent criminals.

The legend of the X’tabay comes from a Mayan legend of two very beautiful sisters who were completely different. Xkeban and Utz-Colel. Xkeban was a very free spirited woman. She was compassionate, emotional, and sexually liberal. Even though she was considered a sinner, she went out of her way to help. She would help animals and people in need. She was a kind person. Because of Xkeban's sexual behaviors, the town refused to see how compassionate and kind she was. All the townspeople saw was a sinner. Utz-Colel was doted on by the town because of her purity, but she was mean and not kind, that didn't matter to them.

One day, Xkeban passed away, and there was a sweet smell and flowers growing around her body. After she was buried, Xkeban's grave grew more beautiful flowers. Utz-Colel was jealous and believed that her death would smell even better. Eventually, Utz-Colel died, but much to everyone's surprise there was a horrid smell. The town buried her and the flowers that were at her grave site immediately died. Utz-Colel was not happy in death, she believed that sex was the reason why Xkeban's grave was beautiful and was set to come back to life. She made a deal with evil spirits and came back as the X’tabay. She seduces and punishes men.

An Encounter with Xtabay

One night after the dance in Hacienda Tanlum in Merida, Yucatan. Jacinto walked a woman home thinking she was going to be his new conquest. He had drunk some brandy, and she had some too, though much less. Between hugs and kisses he was ready for an entanglement.

They walked on a white dirt road, covered in shadows. The moonlight made it seem like the trees were long arms waiting to catch them or tentacles that belonged to some strange being that moved against the wind. They walked by many mud and palm houses. Jacinto started to become scared of how remote they were traveling. The woman replied to him ‘Soon...soon we will arrive…’ she smiled at him flirtatiously.

Jacinto and her did not dance long at the party, when she asked him to accompany her home. Something that Jacinto took as a possible entanglement. And he accepted willingly. Jacinto asked her name and he was surprised at her response. “Xtabay” the girl replied. “My father named me that because he thought I could use such a name.

Jacinto replied “Your father was right, as you are as beautiful as they say she is”

Jacinto knew the Mayan legend Xtabay. They say that she bewitched Macehual. (macehual translation is that it means commoner) She would go to his home to make love to him and leave him dead at the bottom of the ceiba tree after their encounter. He laughed at the sound of her name. “You are so funny” he says “And the name does suit you”

Jacinto could see a silhouette of a tree in the distance. As they got closer it almost seemed like this tree was getting bigger and bigger sprouting from the ground. Its leafy branches covered the path. Jacinto and Xtabay encountered two animals along the way the Pujuy bird and a snake named Ochcan. Both of which seemed to have a connection with Xtabay.

They at this point seemed to be walking for hours and still had not reached her home. When Xtabay said “We are here”

“Where is your home?” asked Jacinto “I only see a giant tree who’s roots look like claws digging into the earth”

From the translation I did it seems as if under this tree was a piece of like rock or earth in which her home was so under the tree and covered by the roots was her house.

“This is my house” Xtabay replied. And with her magic the earth (rock) under the tree turned into a door. Jacinto was in complete surprise.

“Don’t be scared” she said to Jacinto “My father designed this entry that goes with our traditions, you will notice that behind the tree and under this trunk is a house” To elaborate further the tree covered the entrance of the home.

Jacinto could see a faint light coming from the home.

“I lit a candle so I wouldn’t hurt myself in the dark. My parents aren’t home as they are in Merida. I am not sure if you want to come in. People may talk but I don’t care” she said. Jacinto’s fear left at this point. They enter a home with strange furniture made out of tree trunks and bejucos (bejucos are vine-like plants that grow in South America). Xtabay led Jacinto into a room. Jacinto thinking this was the moment he was waiting for was in for a surprise. Instead of a bedroom it was a cave filled with stalactites and stalagmites that show brilliantly. On the wall there were statues. The statues were of satan and other demons who seemed to be laughing. Xtabay tells Jacinto not to worry, that they are just statues, just rocks even though they seem to move sometimes. They continued to walk further into the cave. At one point Xtabay let Jacinto know we are almost at xibalba.

Xibalba the after world of the Mayas where the dead dwell. Xtabay lisited different underworld gods and demons. Telling Jacinto that at one point she reached the 9th level of Xibalba but was let go by Ah Puch the Mayan god of death. She wasn’t sure why. Xtabay expressed that the reason she was let go was because she resembled the real Xtabay, and Ah Puch’s real daughter. Xtabay led Jacinto to a place where they could rest and sit. Jacinto climbed over rocks, he was suffocating and his heart was beating wildly. Soon he arrived. Xtabay on the other hand climbed with ease. She seemed to be flying thought Jacinto. They arrived at a green space near the cave opening. There Xtabay seemed to be waiting for him naked, with achiote colored lips and demonic eyes. At this point Jacinto was overcome with tiredness and sleepiness. He falls asleep and wakes up the next day Jacinto woke up at the base of a ceiba tree. His neighbors thought he was dead they took his body to his home. And to their surprise he wasn’t dead he was alive. Jacinto later retold his story to an older man from his pueblo. After hearing the story the old man told Jacinto, that he did meet the real Xtabay the reason why he lives is because he is not an Indigenous person. As Xtabay only goes after Mayan men.

How Colonization influenced this tale

Of course, as with most legends, the Spanish invaded and changed them to fit their agenda of colonization. So they've added in all the things about purity, they made the sacred Ceiba tree something evil, and presented Christianity as salvation. The Ceiba tree was sacred to the Mayan people, as they believed a virtuous person would become this tree after death. It was also seen as the embodiment of where heaven, earth and the underworld meet.

It is possible the name X’tabay comes from the Mayan Goddess Ix Tab, which was the Goddess of hunting, with the use snares and traps. Others believe she was the Goddess of suicide, as the "tab" translates into rope for exclusive use. Suicide wasn't seen as taboo and this Goddess led those who died by suicide into paradise. So it made sense to them to take this and turn her into something evil. Since suicide in Christianity gets you to hell.