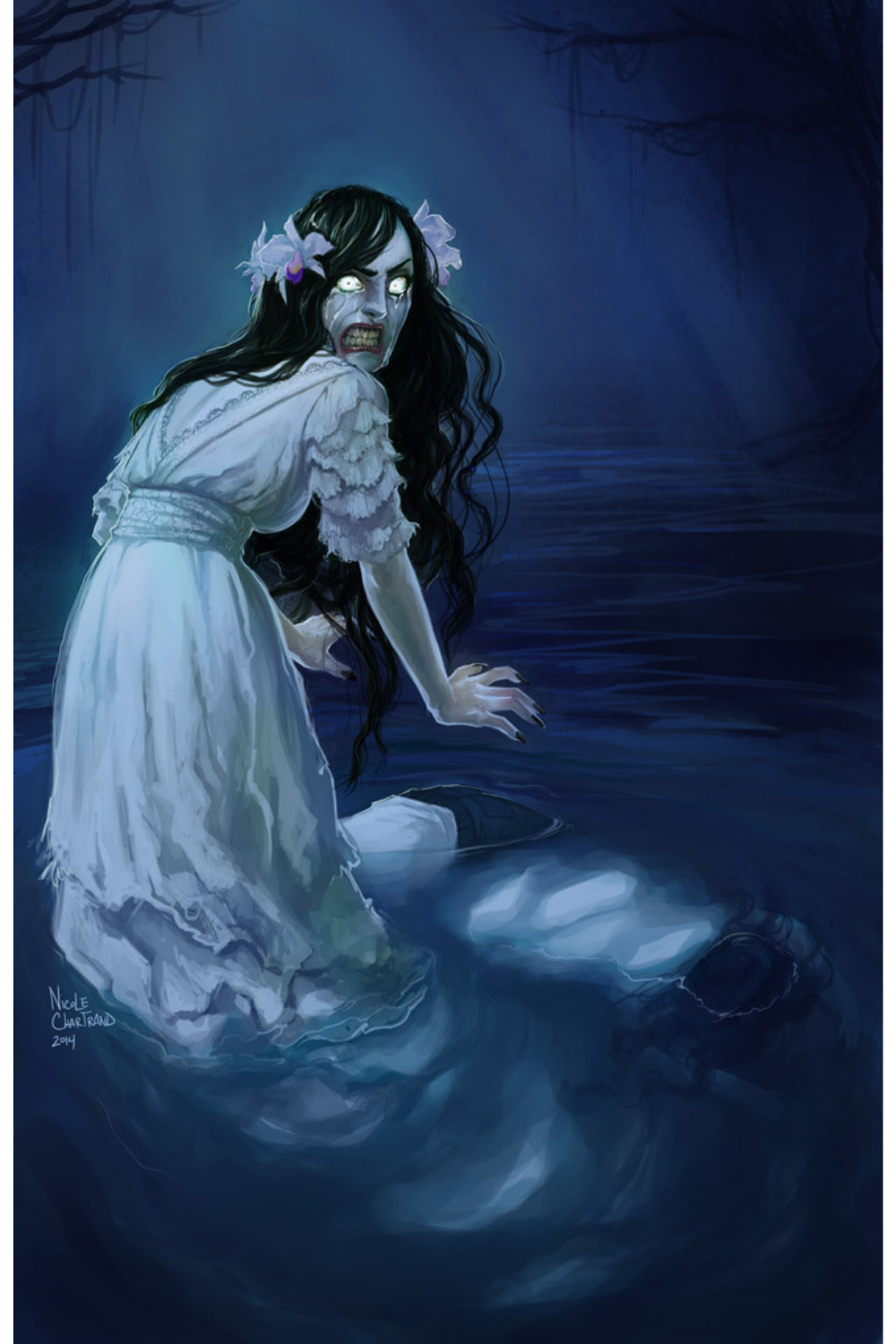 The story of La Llorona is one as old as time, the origin of the story is unknown, but it dates back to possibly colonial times in Mexico.

The version most familiar with everyone is that there was once a beautiful, but poor woman and she marries a handsome and rich man. They have kids and one day, she sees him with another woman (in some versions, he leaves her and the kids and she later sees him with another woman). In a jealous rage, she goes back home and drowns her two children and then kills herself. Upon trying to enter heaven, she is told she must collect the blood of her children to gain entry. She now roams nears rivers and creeks, crying out "Ay, mis hijos" and searching for them.

This is often used to scare children into obedience, "behave or La Llorona is going to get you" and can be heard in every Latin American country. There has even been reported sightings of her in New Mexico, Arizona, California and Texas. However, many cities have their own versions of La Llorona.

This is a less known legend, one from a little town, San Pablo Del Monte, in Tlaxcala, Mexico and dates back to colonial times.

There was a woman that was so beautiful and she was married to an abusive partner, he was so jealous of her beauty that he locked her up in a room, where rats bit her face and she was starved. Their 2 kids were as beautiful as her, and because they reminded him of her, he was beat them, repeatedly aiming for their heads. He beat them almost to death and in an attempt to save them, she escaped the room but her husband set a pack of dogs on her. She was badly hurt but managed to crawl to her boys and carry them to a field, where they all passed away together, hugging each other. After her passing, the town began hearing cries and wails at 1030 at night. Usually every night in October.

During war time in an unspecified town in Mexico. A woman and her children lived in the outskirts of this small little pueblo, near a lake. Her husband was off fighting in battle. One day, invading soldiers came to town, but the family was unaware. Thie woman went about her day, she went into town for errands and left her children behind. The invading soldiers were pillaging the pueblito and killing all the residents.

She arrives into town and sees what is happening and realization hits her, "my kids are alone". She runs back to her home but none of her children are there. The home is empty and ransacked. She walks over to the lake and sees the bodies of her children floating, lifeless. In her grief she joins her children and drowns herself.

Now she roams the Earth looking for revenge. Maybe perhaps going after the descendants of those soldiers. She is not always evil and this trope of the evil woman is not always the truth. During war time horrible things do happen and soldiers often kill innocent people and including children.

In Huacasco, legend tells that if someone hears La Llorona it is an omen of death, someone in the pueblito will die. Now you don’t have to know the person, but if you hear it within this town someone in that little town will die. So Martha was on the porch one evening finishing her chores of the day. When a breeze comes towards her, carrying a voice. This breeze sweeps around her and she hears the wailing of a woman. Just as suddenly as it came the breeze stopped. The first thought that came to Martha’s mind was ‘oh no someone is going to die.’  The next day she finds out a man who was an acquaintance of hers had died the prior evening, around the same time she heard the wailing breeze. He was driving drunk and he flipped the car many times until he landed in a barranco (ravine).