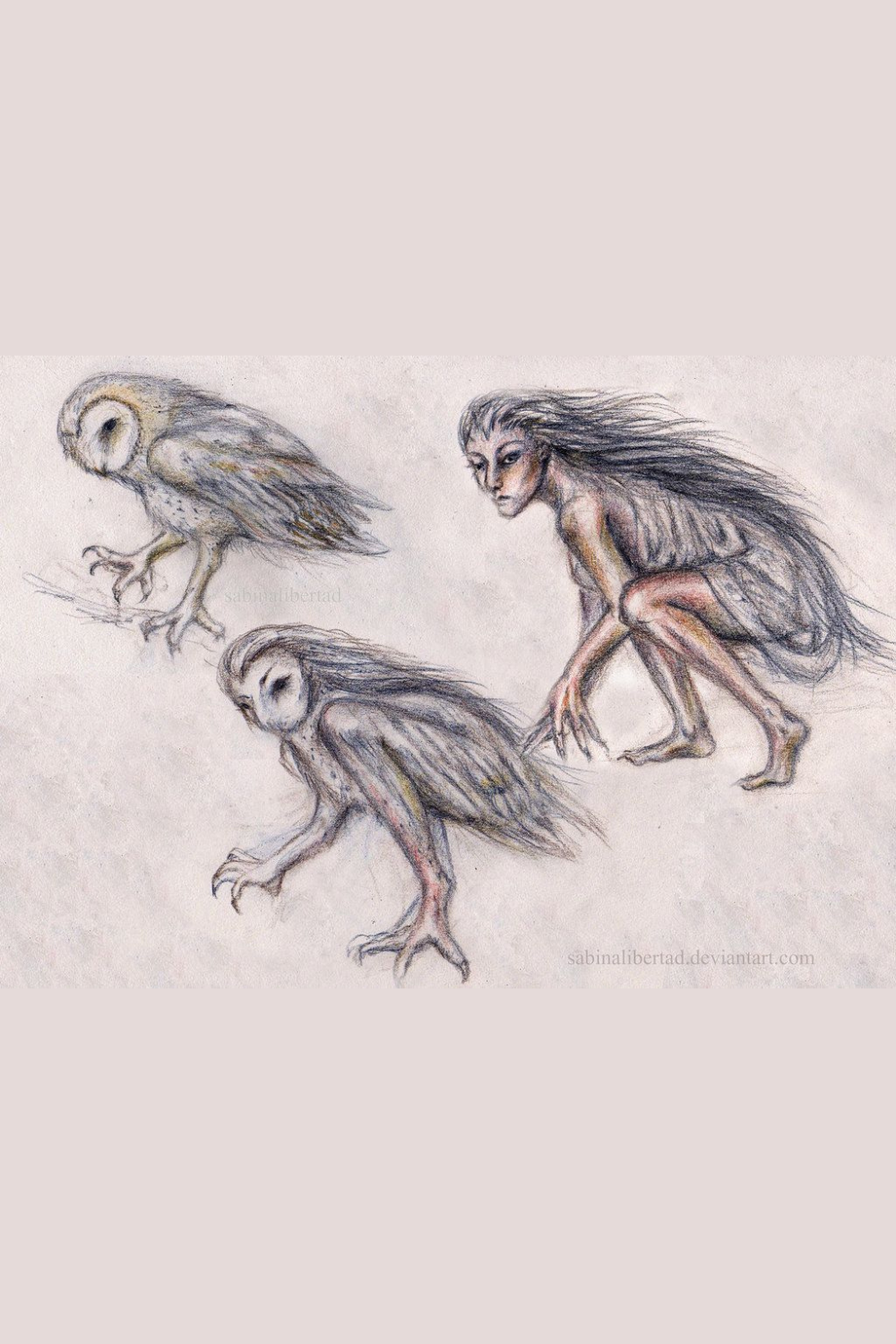 The legend of la Lechuza is one that can be heard all over Mexico. It is said that a lechuza, or owl, specifically a white owl, is a bruja or witch that has taken the form of this owl. There are small owls that are believed to be witches, but the legend of La Lechuza is one giant owl. Some say it is a white owl, but there are stories and reports that it is black owl.

It is 7 feet tall and has a wingspan of 15 feet. Although it is an owl, it is said to have the face of an old woman. This specific lechuza has been reported only in Chihuahua, Coahuila, Durango, Nuevo Leon and Tamaulipas and in the Rio Grande Valley of Texas and California, especially southern CA.

According to most variations of the legend, the Lechuza was once a woman who was wronged and now seeks revenge. Sometimes villagers killed her child, other times the child was killed by a drunk (and she is known to attack drunkards). Some other versions of the legend tell that the witch herself was killed by locals and came back to seek revenge. Depending on where you hear the tale, the lechuza is sometimes just one bruja, but in other places, any bruja can become this giant owl, it is a witch that has sold her soul to the devil and they transform at night.

Some versions of the legend, the Lechuza only preys on adult men, drunks specifically, but in others the lechuza craves the blood of newborn babies and especially unbaptized babies.

It is common to be told, “do not whistle three times at midnight” for it is an invitation for the Lechuza. It is said the Lechuza has swooped down on cars and can travel at the same speed.

According to legend, salt can protect against it, and many put salt on their windows at night for protection. If you see it, you should also cuss her out to drive it away, but other versions of the legend say this may make it more mad, so be wary of this one. Tying a rope of 7 knots and hanging it on your door will also protect you, since it is a sign of acknowledgement and respect toward the lechuza. Some say praying can also save you, specifically the Magnifica (Magnificat), a prayer from the gospel of Saint Luke, but it must be recited in Spanish and then also backwards.

There are many stories of sightings of the Lechuza, the following is Nuevo Laredo, in the 1950s: There was a lechuza terrorizing the town, and the locals came up with a plan to kill it. It was lured out of the trees by using a child as bait. When the Lechuza attempted to take the kid, locals fired at it with guns, but only hit its claws before it flew away. The next day, they went to the house of the bruja they believed to be the Lechuza and she answered the door with a bandaged leg.

A 9 year old living south of  San Antonio, TX, in between two little towns called Von Ormy and Lytle was at home alone watching Spongebob. The sun had just set and it was a full moon. (we’ll use a fake name), Child heard noises outside and thought it was their dad coming home from work and naturally went outside excited to greet their dad. However, their dad was not out there, instead it was a massive owl. It was sitting on a picnic table across the street and looking right at them. The massive bird was jet black. It stared for another 15 minutes but then left when the father arrived home. The kid told their grandma about this and she began praying and doing a limpieza (a cleaning) with an egg, and told the kid the story of the lechuza. The kid did not feel fear however, and wondered if the bird was there to warn them about something. Not too much later, there was a giant storm that damaged a lot, except the house and the picnic table where the lechuza was sitting.

Owls Around the World

The wariness of owls can be traced back to the bible, and even before that, in Aztec and Mayan culture. Fear of owls is also seen in China and ancient Greek and Rome. There are various bible passages referring to owls as something dark and to be rejected by God. in China, the owl is an omen of disaster. In ancient Egypt, they were a symbol of death, the night and cold. In Argentina, stories of Cachiru, a malignant mythical owl that steals the soul of men at death and turns them into ghosts.

In Teotihuacan (pre colonization Mexico city area) , the owl was associated with the God of rain, and a bad omen and they were also associated with Mometzcopinqui , which are women born on the date of “Ce-Ehecatl” or “one-rain”, which caused them to develop supernatural abilities).  They are said to have the ability to remove their limbs and replace them with bird (turkeys or owls) legs, wings and sometimes beaks and this lets them fly. They were said to feed on the blood of babies. This is possibly where the myth of witches feeding on newborn blood came from after colonization.

In Pre-Incan civilizations in what we know now as Peru, they were associated with death and sacrifice. In Mayan culture, the owl was associated with Xibabla (the underworld) and was known as a messenger of death.