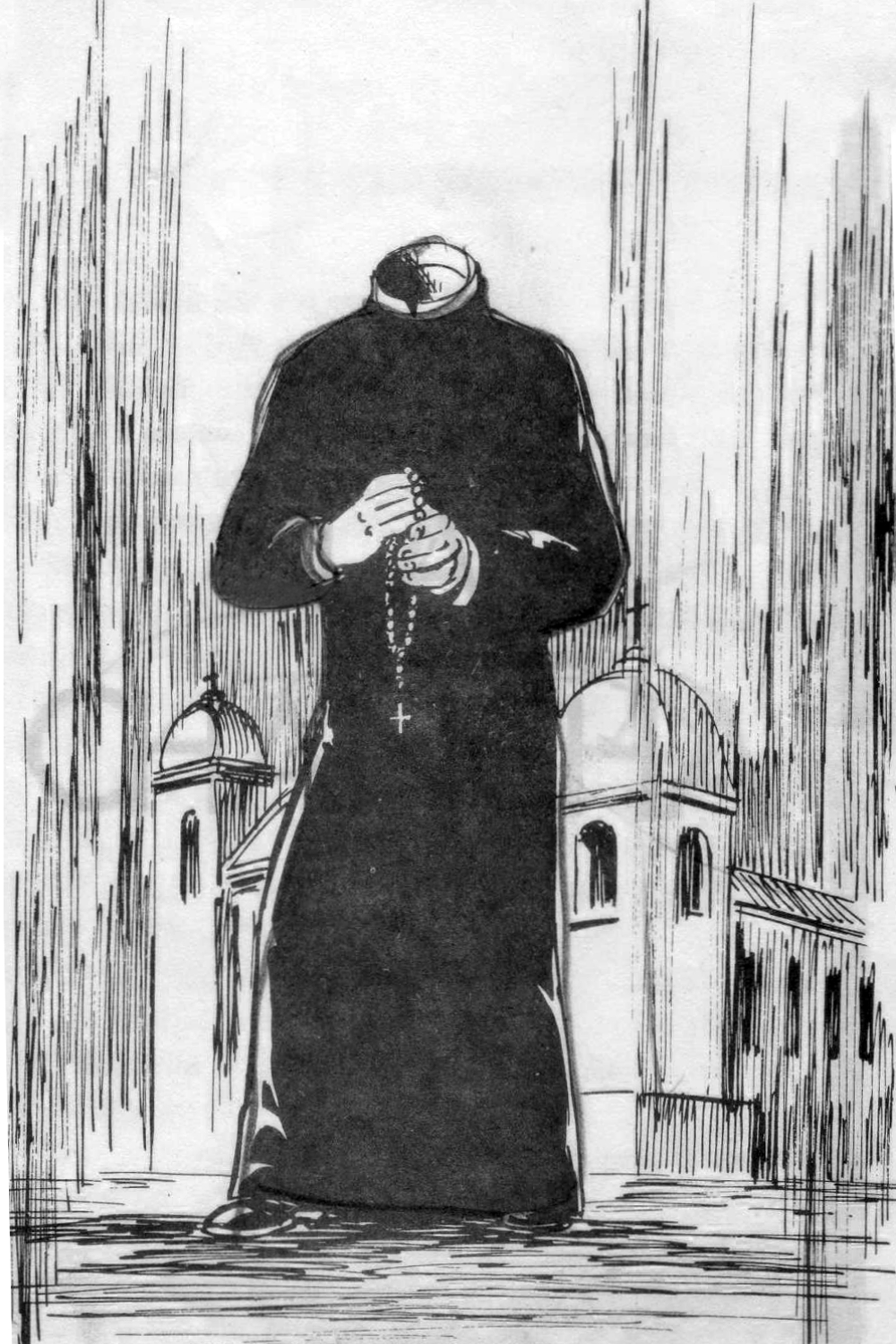 Many places in Latin America have their own version of the Headless Priest, this is the tale from El Salvador, one from Mexico, Guatemala and Nicaragua.

Others say the spirit of the headless priest was killed during a revolt, he was fighting side by side with oppressed campesinos. After being captured, he was decapitated by the authoritative government of the time.

Legend tells that the spirit of the headless priest can be seen leaving the front doors of a church, on Friday nights, especially during a New Moon. In San Salvador, the capital of El Salvador, he can be seen going from church to church, but in towns with only one church he wanders the streets and before the night is over, he can be seen entering the church again, through the church’s closed doors. Many claim to see him go through the doors and disappear in the bell tower of a church.

Those who have seen this spirit, say that he is very tall, but missing his head. He is always holding a rosary in his hand and it is said only those out late at night encounter him. They feel a bone-chilling cold breeze and cannot speak from fear, for a few days after seeing him.

They say he is searching for his head, and often appears at churches where priests have died in suspicious circumstances.

Some say that if if you are out, late at night, a door to a church appears, seemingly out of nowhere, in front of you. Something compels you to enter the church and can hear a priest singing. The person (who is assumed to be full of sins) stays and when it is time for the consecration, the priest turns around and has no head and his hands are full of blood.

Older folks tell stories of el padre sin cabeza appearing beneath leafy trees and frightening victims to the point they turn their lives around for the better.

The Headless Priest in Mexico

In Mexico the legend originates in the city of Tonala, Jalisco. Pedro Moreno was a Catholic priest who was lynched in the street during the Cristero war. The Cristero War was a war that happened in Mexico from 1926-1929. The government promoted atheism. So the president at the time Plutarco Elias Calles, did an executive order called Calles Law, which basically eliminated the power of the Catholic church and suppressed religious celebrations at the local level.

There were uprisings and Calles called the rebels Cristeros because they believed in Christ. Leaders of the Catholic church, nuns and priests were persecuted. Public executions were not unheard of.

Father Pedro Moreno, the headless priest, is said  to be seen at midnight, in the vicinity in the ruins of Santiago Apostol Parish, in the path that is located between the arch and the bell tower.

The Headless Priest in Guatemala

In Guatemala, in the catacombs of the oldest churches La Merced, Santo Domigo and San Francisco the spirit of a headless floating transparent priest is seen. People who see this floating priest are left feeling nauseous, with fear, chills, swollen legs as if they have gout and overall discomfort.

In Santiago de Guatemala, there is a legend of a priest who died in the San Miguel earthquake of 1717. It is said he guards and occult treasure in the convent of Santa Clara, they say this priest also gives out gold to the poor but people are shocked to realize that a headless priest gave them alms.

Video of sighting in El Salvador: