El Chamuco: Legends About the Devil 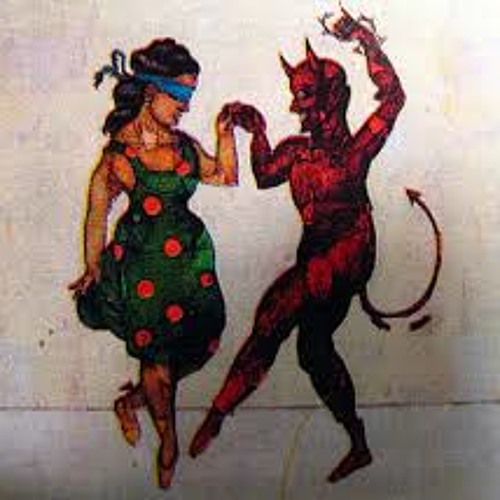 There are many legends surrounding the devil, Satanas, el Chamucho (whatever you want to call him).

It's very common for kids to be told by parents “si no te duermes, el chamuco vendra y te jalara los pies (if you don’t sleep, the devil will come and pull your legs)" in Latin American households (at least ones that believe in the supernatural).

Dance With the Devil

There are many versions of this tale, from TIjuana, Sinaloa, Tamaulipas to California and Texas  They are usually known as the “Dance with the devil”. This legend serves as a cautionary tale, warning young women to follow social norms. The following is a version from Escuinapa, Sinaloa.

In the year 1980, a group called Los Fredys, performed in El Centro Social Hidalgo, in Escuinapa, Sinaloa. A young lady, Maria, who had just turned 21, was very excited to go see them. She had just broken up with her boyfriend, but that wasn’t going to stop her from having a good time. The day came and she along with hundreds of other people, got ready for the concert. The music was popping, people were dancing and while many men attempted to ask Maria for a dance, she declined every single on. Then a very well dressed man, in a black suit, asked her to dance and she finally agreed. They danced all night, and then it was over and Maria asked for the man’s address after he dropped her off. The next day, she went to go see him, but was shocked to find an abandoned house at the address. She observed the man through a window and was terrified when she saw that he had hooves instead of feet and red fiery hands. She ran away in fear and wasn’t seen for days, later it was discovered she had died by suicide. She could not cope with the fact she had danced with the devil himself.

Some versions of these are different, sometimes parents don't give a young woman permission to go out, so she sneaks out. Sometimes she notices the hooves as the night is coming to an end. Other times, in the middle of the dance floor, the devil and the young woman spin in circles and he drops her from the air, which causes her death. Other times, they spin all the way down to hell and she is never seen again.

The following is a very common legend about the devil, that has probably happened to every tio.

There was a man, Don Jose, who was a campesino (a farm worker) who was accustomed to getting a drink at the local bar after a long day at work. One of these nights, he went to the bar and ran into his friends, Don Genaro y Don Joaquin, and they told him that they had heard from different women that the devil was roaming around after midnight in the town. One had seen him in the form of a big black dog and another in the form of a bull. Don Jose, who did not believe such things, scoffed and said “these are the rumors of a bunch of bored housewives, a mi el diablo me pela los dientes”, which means, the devil is scared of him and not the other way around. The night came to an end and Don Jose began his walk home. While walking, he heard the cries of a baby, he looked around and indeed, found a baby. He picked the baby boy up and said “ Desgraciada y mil veces maldita la mujer que te abandonó chamaco, tu que culpa tienes (a thousand curses to the damned woman that abandoned you, little one, what fault do you have)” and carried the baby home.

As he is walking, the baby gets heavier and heavier, until it is just way too heavy to carry. He stops confused and looks down at the baby, and then, suddenly it says “Te gustan mis dientitos papi” “do you like my teeth, daddy” and it has giant teeth, red fiery eyes and horns coming out of it’s head. Don Jose threw the baby and ran, and it is said he was never right after that night.