The Legend of the Huay Chivo 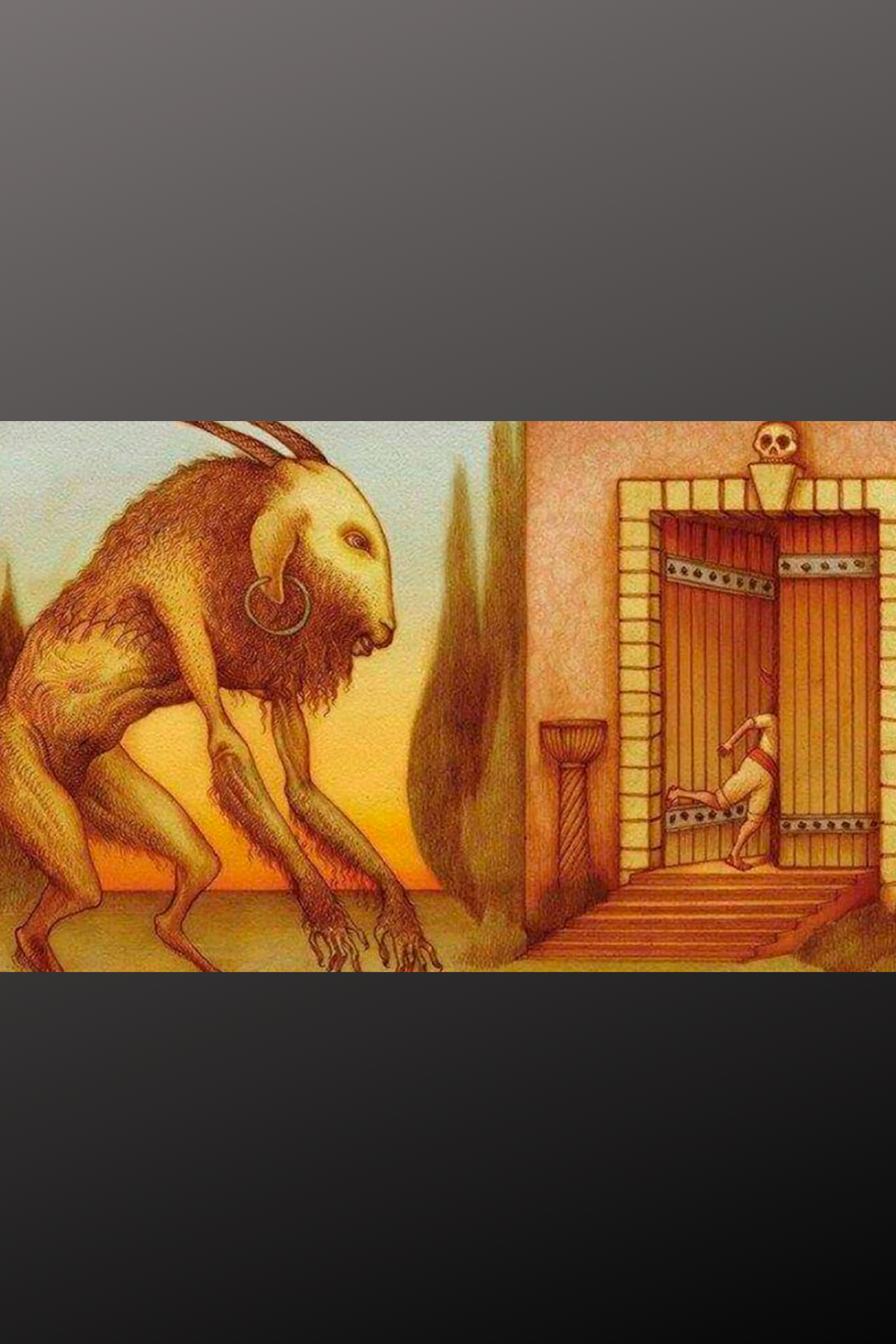 The tale of the Huay Chivo can be heard in Mexico, specifically the southern region, Yucatan, Campeche and Quintana Roo, in the northern region of Guatemala, and jungle areas of Belize, though cryptids of similar appearance are heard of worldwide.

In the last hundred years or so the Huay Chivo has been depicted as a half goat/half man only, instead of any half animal/half man combination. This is likely due to Spanish influence. Stories of half-man/half-animal beings like Huay pek (dog-man) predate the Spanish.

The Huay Chivo is a Brujo that transforms himself at will and only during the nighttime. Sightings usually happen after midnight.

The Huay Chivo is said to have glowing red eyes, is covered in thick black fur, stands on 2 legs, with horse or goat legs, the torso of a human and the head of a goat. It has been described to be anywhere from 4 feet tall to 6 ft tall.

The Huay Chivo has been blamed for the death of cattle, like goats and chicken. It is a creature of the night and is said to be found roaming on the darkest of nights. If the Huay Chivo is near, you will smell a foul smell, and you will feel a wave of cold air. If you do see the Huay Chivo, you must look away, for if you stare at its glowing red eyes, you will get fevers and start feeling sick.

It is a shape-shifting sorcerer, one that uses the forces of evil to turn into the beast, either half dog (huay pek) or half animal of choice, this was always a man and in order to transform the sorcerer must take of his head and leave it at home. Some say that in order for a warlock/sorcerer to obtain the ability to transform himself, it is necessary for him to perform a dark rite, in which he sacrifices a goat. After a series of procedures, the warlock becomes half man and half animal, and comes out to frighten and kill animals.

A brujo/sorcerer must make a circle with black candles, rip the heart out of a baby goat, drink its blood as an offering and then pray the padre nuestro (the Lord's Prayer) 9 times and then do 9 turns to the right and backwards, at the last spin, the brujo/sorcerer turns into a “wind” and then the Huay Chivo forms out of thin air, ready to terrorize.

The legend of the Huay Chivo

There was a young child who knew all about plants and their properties and the gift of healing people. When he was older he became a Huay (sorcerer) and fell in love with a young woman who helped his family care for their goats. He was desperate and crazy and made a deal with Kisin (or Cizin, the flatulent one, an ancient Maya god of death), he exchanged his soul in order to become a goat and be close to the young woman. The spell didn’t work and instead, he became a being that transforms into half goat half man at will and only at night.

There was a handsome young man that lived in Merida, Yucatan. Though he was handsome, hard working and intelligent, he was also poor. He loved a beautiful young woman, but she was of a higher social class, and her parents forbade their marriage due to the young man’s social class. Distraught, he ran into the nearby jungle, yelling at the top of his lungs. In his rage, he called upon the devil and the devil appeared, asking what he could do for the young man. The young man said he would sell his soul to be near the young woman, anything to be with her, even if it meant for eternity. The devil told the young man he could make this happen and then turned him into a goat. The once young man, now half goat, protested, saying this isn’t what he wanted, but the devil shrugged and told him he did his part. He turned him into a goat, so that the young man could join the young woman’s goat herd and always be near her, in the family’s hacienda. After that, he laughed and took off, leaving the now half goat/half man standing there angry. To this day, the young man, now called Huay Chivo, runs around at night, killing farm animals in rage, because he was tricked into becoming this creature.

This is from a study on Maya culture titled “All belief is beyond” Intercultural boundaries, spaces and rights in temporal migrants from Yucatan in Quebec. Yucatan farmers in a temporary work program in Quebec Canada were interviewed in 2012. A man retells what he knows of the Huay Chivo and what happened when his brother saw one.

“You see if things at night over there, creatures, they pass buy. There are creatures, half animal half man, Huay Chivos, Huay Peks or Huay Mis, and you cannot kill them. My grandfather told me once, there was 3 men, they tried to chase one down, they fired their rifles at it, but it just continued running, then it turned around, paused and looked at each one. The day after that, one of them passed away, and within the week, so did the other 2. You know, when you see these things, you should wait to talk about them. At least a week, because the malo aire will be better by then.”

“They say when the huay chivo talks, it bleeds from the mouth, it has glowing red eyes and if you look straight into its eyes, you can be frozen from fear. My brother was talking when he saw the huay chivo pass by, suddenly, he could no longer talk, he froze and 2 hours later he could move”. “They say you must have a cross, put holy water on it and then leave it on your door, the huay chivo will leave you alone after that. They say they are everywhere, where my grandparents are (Yucatan) and my uncle says if you don’t do a novena for someone who has passed, they will become a huay chivo."

Though no one saw the Huay Chivo in this instance, on the 4th of January in I can’t find the year, there were 7 dead dogs, 42 dead turkeys in one farm. In another there were 3 dogs killed, residents in Valladolid believe it was a Huay Pek or Huay Chivo. At this same time, there were chickens being killed from people’s yards and all these animals were found with their hearts missing.

On the 4th of September in 2015, in Merida Yucatan residents of the town claim to have found the remains of a Huay Chivo. Workers at a construction site claim to have seen this creature with legs of a horse and the head of the bull, but when more people arrived at the scene, only hairs of the body remained. After this discovery, residents in a nearby town, Kanxoc also claim to have seen something similar. One person told reporters the only way to kill the huay chivo is to carve a cross into a bullet and find the head of the brujo (remember, the brujo must leave their head at home to transform).

In another newspaper article from Yucatan dated April 2013, a man named William May Amezquita retold the story of when he saw a Huay Chivo. Once when he was a child, he was out late, even though his dear mom always warned him about evil things wandering at night. This time, it was just past 11 and he was heading home. He was walking through an area where there was no lights, and he recalls it being extra silent. He heard hooves, very loud hooves, and saw the shape of something very big. It had the head of a bull and was charging straight at him, he jumped out of the way and the huay chivo continued on his way. He recalls hearing stories of this creature before and says if he hadn't jumped out of it's way, he believes he would be dead.