The Legend of El Cadejo 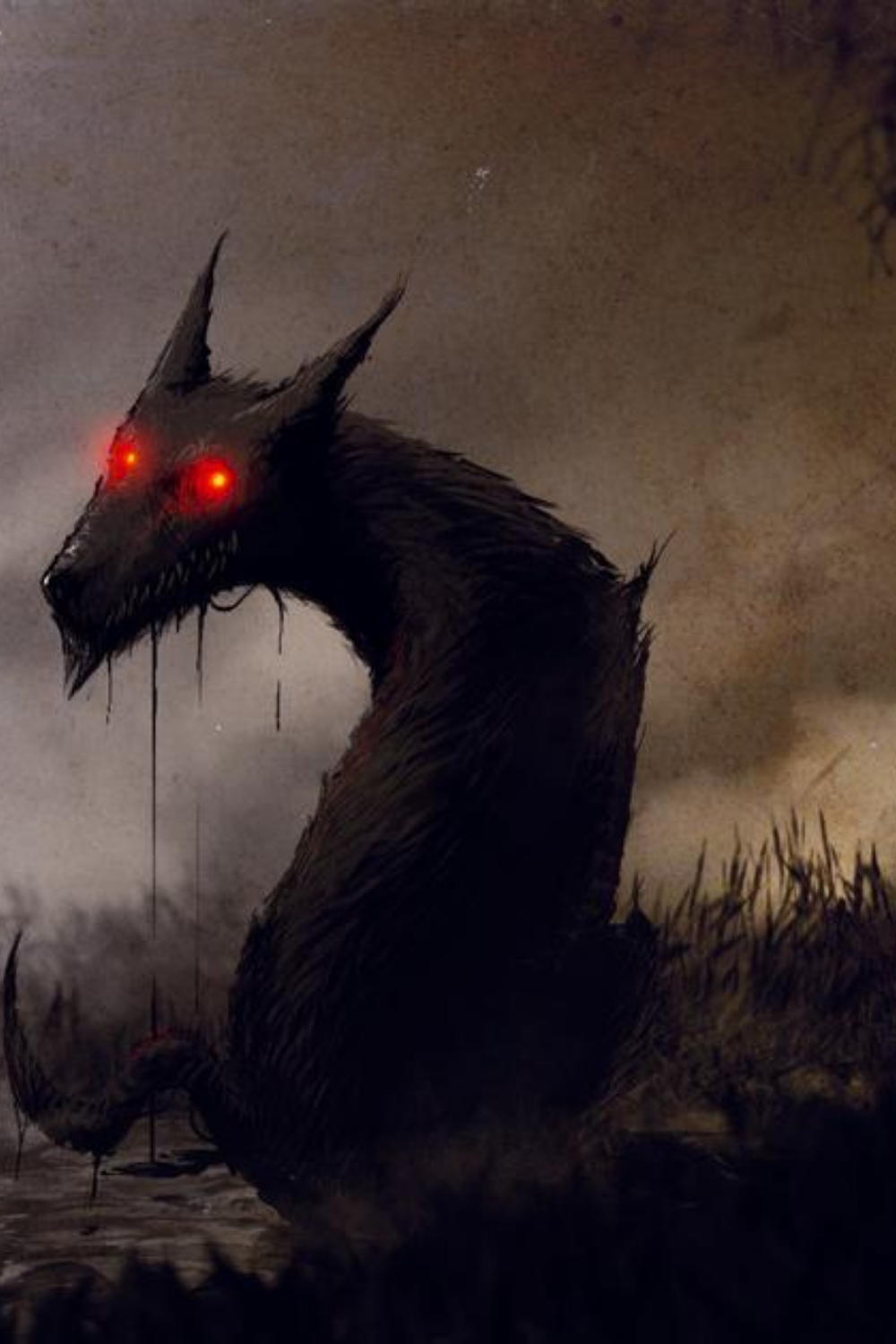 The legend of el Cadejo can be heard in El Salvador, Guatemala, Honduras, Belize, parts of Mexico and even southern Argentina.

The tale of El Cadejo is part of Salvadoran folklore, along with La Siguanaba and El Cipitio. You can even find a brewery called El Cadejo in San Salvador.

There are various origin stories of the cadejo. One legend tells that God sent the white Cadejo to protect those that lived further away from towns,  were out in the late hours of the night and needed protection from entities like La Siguanaba. After seeing this, the devil created the evil Cadejo, to mess these people up. Some legends say the devil himself is the Cadejo.

One of the most famous stories of El Cadejo tells how God sent the dog to earth.

Juan Carlos was a guardian who lived in a thatched house in the country fields near La Aurora in Guatemala. Juan Carlos worked further away from home and arrived late to his home, usually around midnight. One day, he arrived home and saw a white dog. When the dog saw Juan Carlos, it would shake, turn around and then disappear. Juan Carlos attempted to follow the white dog, but could never catch up to it. One day, instead of running away from him, the dog was very still and did not move until Juan Carlos touched his paw. The dog suddenly opened it’s eyes and said “you do not need my help anymore”. Juan Carlos was very scared and asked, what help? The dog replied, in pain, “I am a dog sent from above. My mission was to protect you from any danger. But you have shown me you do not need my help anymore”. The dog then closed his eyes, Juan Carlos buried him and remembered the white dog every time he came home.

From the book, Los pajaros no tienen fronteras (the birds do not have borders) leyendas y mitos de america Latina (legends and myths from Latin America) by Adna Iturralde

There was a man Don Eladio, who was injured while working, he wasn't injured to the point of not being able to work, but he lost a few fingers from a hand and was unable to do his normal job. He was demoted after the accident and five years after the accident, he was a darker, meaner and more sarcastic person, but also he was an alcoholic. Don Eladio also beat his wife regularly, and Don Eladio’s son Juan was very tired of his father’s behavior. Juan knew in his heart that the alcoholism was to blame for the person his father had become, so he thought he could give his father, un susto ( a good fright).

Juan spent years telling his father to come home early and one day he devised a plan. He went to the butcher, got the ugliest cow skin he could find. This cow skin was black and hairy, and he was completely hidden by it when crawling on four legs. Aside from the hideous cow skin, Juan also got a pair of dog chains from the black smith. He left his new items hidden in the woods, under some bushes and went back home. Right before midnight, he got up from bed and left his rancho (home), got his horrid disguise, put it on and waited for his father. A while later, his father drunkenly passed by and he came out from his hiding spot. He was a monster, growling and chasing his father, with chains rattling behind him. Don Eladio ran home, frightened and drunk. Juan felt accomplished, took the disguise off, hid it and went back home. He took a shortcut, arrived before his father and pretended to be asleep. Don Eladio showed up, frantically knocking and crying, he swore to his wife he would never drink again.

For two weeks, Don Eladio kept his word, his temperament changed from dark, sarcastic and wife beating, to nice and helpful, but the drink was too much and won in the end. Don Eladio left, stating he would be back home early, and would not drink, but by the end of the weekend, he was back to his old ways. Juan figured it was time for another susto, fright, and was ready, waiting for his father to pass by midnight that Friday. Again, on all fours, he chased Don Eladio, growling, chains rattling behind him. Don Eladio ran and ran, repeatedly falling, but did not yell as much. He got home and did not cry, nor mention the susto to his wife. He rested one day, but the next night Don Eladio was out drinking again. Juan, in his monstrous disguise, waited for his father at the same time and without a beat, Don Eladio passed by stumbling. The monster chased him, but Don Eladio did not run home, he ran into the woods and got lost. The monster did not follow, so Don Eladio slept there. Don Eladio missed a day of work after that and was almost fired, for the next 3 days, no one knew where Don Eladio was, but he came back on a Thursday night. He stayed up all night, with a look on his face, as if he had some sort of plan. He left for the tavern and Juan figured his father needed only one more susto to be free of the alcoholism.

Juan waited longer than usual, almost 2 hours, and then he heard his father yelling “donde estas, where are you”, the monster came out and instead of looking scared, Don Eladio charged, yelling “Maldito animal, the voy a matar, Damned animal, I will kill you”. Juan was very confused, as his father tried to kill him, he took off his disguise and yelled to his father, “soy yo papa, it is me dad, sola era broma, it was only a joke”. Don Eladio stopped swinging his stick, but did not look at peace, there was no mercy in his eyes, only hate. His father did not say much after Juan’s revelation, but he did say a curse “Por irrespetar a tu padre, en cuatro patas andaras, estos caminos por noche, recorreras, for disrespecting your father, on 4 legs you will travel, and these roads by night, you will travel”. Juan was cursed to become the very creature he was pretending to be. Don Eladio continued walking and never turned to look back at his son, even when Juan cried in agony. As he walked away, the hideous cow skin melted onto Juan’s skin, this forced him onto 4 legs and Juan became el Cadejo.

After this night, it was said Don Eladio left his wife and wandered the woods yelling for his son’s forgiveness. Juan’s fate was a little different, God took pity on him and allowed him to either protect or punish those who travel the roads at night. He was a protector for some and punished with death those with a crooked heart.

There were two brothers who walked into the house of a black magician. During a storm, he asks the two brothers to help him with some logs for a fire. The brothers slack off and eat the magician's food, but never complete the task he asked help with. When the black magician realizes food is gone and there is not enough wood for his fire, he puts a curse on the road that leads to the village where the brothers live. Voices bother the brothers, while on their way home, and when they turn their backs to these voices, they get turned into a white cadejo and a black cadejo. When they return to their village, in the form of Cadejos, they are banished and have no choice but to wander.

The dog has been seen in Central America, but also in Texas. There is a description from the year 1780, in the British Isles, in which a Samuel Drew describes hearing a noise like hoofs and sees an animal, a bear or dog with glowing eyes.

In 1949, a young man walked late at night, as he walked he noticed a small black dog. The black dog followed, and would only stare and stare when he tried to shoo it away. Whenever he turned away from the dog and looked back, it would grow bigger in size. He was scared and drew his revolver, aimed and fired at the dog. The bullet left the gun in slow motion and then fell, intact at the man’s feet. When he looked up, the dog was the size of a horse. He fired his revolver again, but the same thing happened, so then he yelled out “Hail Mary most pure”, after that the black dog disappeared.

In Nicaragua, in the 1930s or 40s, A young boy accompanied his great-grandmother to work one night, so that she would not have to travel alone, when he was leaving his grandmother’s workplace, he opened the door and saw a black dog with red eyes. He ran home, terrified, but the dog was right behind him the whole time. He slammed his door and the dog scratched at the foot of the door for a several minutes. When he heard it leaving, he cracked the door open to see if it was really gone and it was. He never went anywhere alone after that and also never saw the Cadejo again.

A man named Jose was frequently out late, drinking. One of these nights, he passed out beneath a tree. When he woke up with a terrible hangover, he found a goat-hoofed shaggy black dog that licked his mouth. Jose got up and staggered home, the black dog followed. Some men attempted to rob Jose, but the dog protected him. Jose arrived home safe and sound. The black dog followed him for 9 nights and on the 9th night, Jose passed away, presumably because of alcoholism. It is believed by Jose’s family members that he The Cadejo caused his death when he licked Jose’s mouth.

In Guatemala in 1975, a 19 year old Maya girl and her sister were sent on an errand by their mother, after nightfall. When they came to the crossroads, a black dog-like animal with burning eyes appeared and would not let them pass. The girls were terrified and decided to walk backwards to return home home. They felt they should not turn their backs on the creature. The girl fell over, and when she got up, the dog was gone, or it had turned into a white mass that walked next to them. She does not remember what happened next, but came back to her senses when she arrived home.

In El Salvador, most sightings were said to occur during the civil war, but a Spanish language news show, Al Rojo Vivo (clip linked below), ran a story in 2016, residents from the city Mejicanos, El Salvador, claim to hear hooves, like a horse. And A Police officer stated he saw a dog, the size of a deer, with red eyes. They hear howling and claim to have a recording. Residents in Mejicanos claim there is a malevolent brujo and this is whom the Cadejo was visiting.

How to protect yourself: