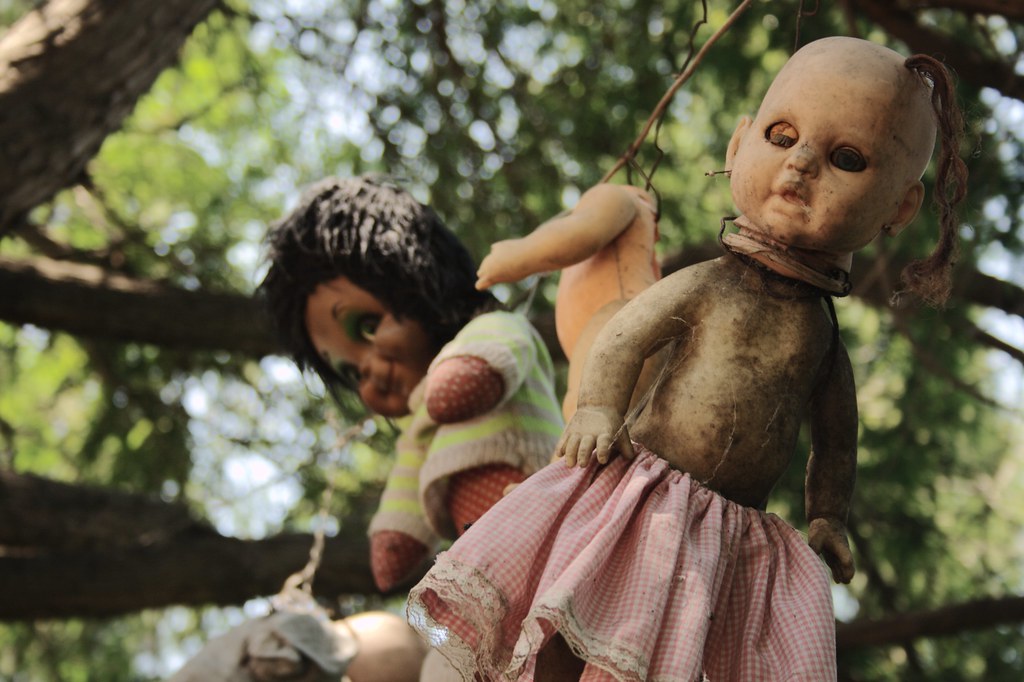 South of Mexico City, there is a small island, full of horrifying dolls.

Isla de las munecas is south of Mexico city. In the canals of Xochimilco, there is a small island that is home to the dolls. They can be found on trees hanging from branches,  wooden shacks and ropes. It is estimated that the island has at least 2000 dolls.

The story begins with a man named Don Julian Santana Barrera. Don Julian left his family in the mid 20th century and traveled to an island in Xochimilco. One day, while fishing he discovered the body of a girl who had drowned in the lake and shortly after finding her, a doll came floating down too. He took that doll and hung it from a tree. It is said that he wanted to appease the spirit of the drowned girl. He claimed to have been haunted by her spirit.

For the next fifty years, Don Julian collected dolls from the trash and the canals and he hung them throughout the island. Some dolls would be whole, other dolls would be mutilated; headless, armless, and taken apart in many different ways.

In 2001, Don Julian was found dead, in the exact same spot where he found the body of the girl. After this, the island became a tourist destination and people now hang dolls in tribute to the girl and Don Julian.

It is now believed that the dolls are possessed by the spirit of the girl. People who visit the island claim that the dolls move their heads, limbs and open their eyes.

Legends About the Island

It is said that if you are near the island but do no visit, you will have bad luck.

There is another curse that you cannot touch or remove the dolls, or you’ll have a terrible accident.

One group of friends were hanging out and learned about the island while browsing the internet and they decided to go. Upon arriving, they felt threatened by the dolls and were all pretty scared. Except one friend, Guadalupe, who was more skeptical and was looking for a prank to pull. She decided to look for the creepiest and ugliest doll to put in her backpack. Her friends told her about the curse and that the dolls should not be touched or removed, but Guadalupe ignored them. Back home, she set the doll on a dresser and was doing homework. She heard a voice, kind of like when a toy has a battery that’s running out. She went into her room and inspected the doll, thinking that it was the doll, but when she looked the doll did not have any batteries. She told herself that she imagined the voice and she lied down to sleep. She didn’t sleep for very long because she kept having nightmares about the doll, she sat up to look at the dresser and she was terrified to see the doll was not on the dresser. She looked and looked and then saw the doll on a chair she had in her room. Terrified, she got up and put the doll in a bag. Guadalupe went to a medium friend and the friend told her that the doll had a terrible energy, she could not throw it away and that she had to leave the doll exactly where she found it. So Guadalupe and a friend returned to Xochimilco and put the doll back in the spot where she found it.